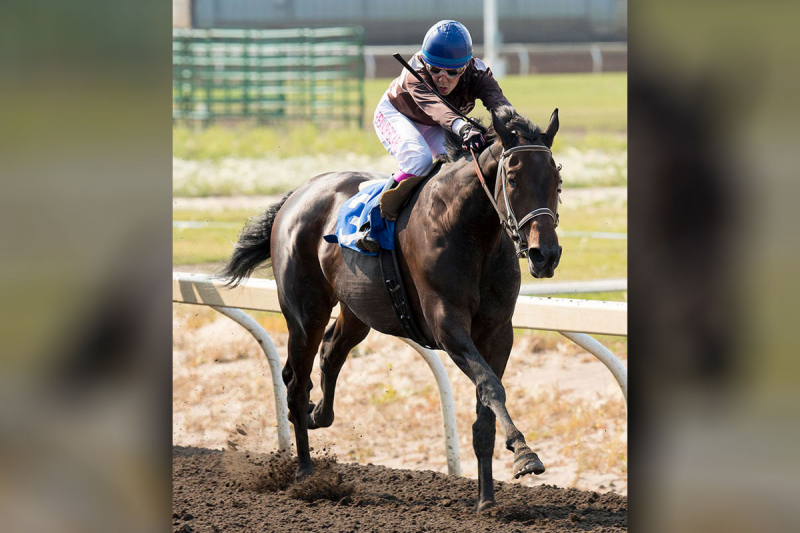 Shannon Beauregard and Port Protection, winner of the The 44th Running of The Duchess of York Photo by Coady Photo/Ryan Haynes

Just over a year ago, jockey Shannon Beauregard was only a few strides away from winning another thoroughbred race. The horse she was riding, a very talented two-year-old named Dark Invader owned by Bar None Ranches, was well out in front and there was only a few yards to the finish line at Century Mile on the hazy Sunday evening of September 19.

It was 8:17 p.m. The victory all but assured, a big smile broke across Beauregard's face. "We were winning so easily," she said of what would she knew would have been her 905th career thoroughbred victory.

Trainer Ron Grieves stood cheering along the rail - two arms raised high into the heavens. "I turned away to shake hands with my brother Kelly, who was standing beside me," recalled Grieves. "Dark Invader was the best two-year-old I had. We had big plans for him."

Then all hell broke loose. Without warning, as so often happens in horse racing, Dark Invader bobbled. Pulling hard on the reigns Beauregard kept Dark Invader upright for five strides. On the sixth stride Beauregard was unable to keep the horse on his feet, Beauregard fell off.

"At first I thought 'I'm OK.' I thought I got lucky. Then wham. A horse from behind stepped and fell on me," said Beauregard, who still has two hoof prints on her right side and a third on her left butt cheek.

But those reminders were superficial compared to every thing else. "Basically I broke my body," said the very talented, extremely personable jockey. "My first thought was to get up and run. But obviously I wasn't thinking. Then I started screaming and crying. I knew my hip was broken right away."

That wasn't all. Her pelvis was also shattered. She broke two ribs and cracked two others. She also had extensive nerve damage in her hands and feet. Operated on almost immediately, two foot-long steel rods were inserted. So was a big, long screw.

Intially the doctors were satisfied that the surgery was successful. The rods which were supposed to be taken out after a speculated three month recovery time were removed in six weeks.

But Beauregard, 39 — and who has been riding full time since she was 22 — knew something still wasn't right with the operation. She kept telling the doctors on her subsequent check-up appointments that, despite a never-ending high dosage of pain killers like oxycontin, she was still in a lot of pain - "And I have a very high pain tolerance."

She also kept telling them that she could feel the bones moving. I could feel them popping and crunching over each other. "Even then the doctors said there was nothing to worry about. They told me what I was feeling was scar tissue and that the bones were connected. They said the x-rays all looked good and everything was still connected."

Finally, at the end of August — a CT scan — an imaging test that uses a computer to put a series of x-ray images together to create detailed 3D images of organs, tissues, bones and blood vessels in the body - was performed at the University of Alberta Hospital.

The results of the CT scan were horribly damnable. "Unfortuntately they confirmed what I thought. The bottom of my hip and the top of my pelvis are still broken," said Beauregard.

Normally an effervescent, bubbly woman who always seemed to wear a wonderful, cheerful grin, Beauregard started to cry. "The lower part of my pelvis is just floating there. Nothing is holding it up.

"There is nothing connected below my leg socket. "I think they really messed up. I think they took the rods out too early."

Asked what now, Beauregard's tears started to flow again. "Exactly. What now? The doctors said they didn't want to perform another surgery. They said it was too dangerous. Basically they said there was nothing else they could do."

"I said 'Nothing?' You can't leave me like this. I'm in constant pain. Everything I do hurts. And now you say there is nothing you can do? I was shocked. I"m still really upset. The surgeon said he would refer me to another surgeon. But that's a 2-3 year waiting period."

"They sent me to the Glenrose Rehabilitation Centre for therapy but because of the pain and, moreover, because my hip and pelvis are still broken I couldn't do the physio. I feel like I've been thrown to the wolves."

Beauregard has looked to other doctors in the United States. "But that's really expensive and I don't have a lot of money," said Beaureguard, who, when she was starting out galloping horses as an 18-year-old in 2000 used to sleep in a tent at race tracks like Saskatoon's Marquis Downs in Saskatoon because she couldn't afford a motel room.

In addition to galloping horses in the mornings she worked as a welder on a farm and also worked in a restaurant. Later, when she moved to Lethbridge she lived in a trailer that belonged to someone else. The trailer didn't have running water.

"I lived on hotdogs, peanut butter sandwiches and chicken wings." But she had a dream and she wasn't going to give up on it.

Growing up in Montreal, Beauregard said she wanted to be a jockey since she was five- or six-years-old and watched the movie 'The Black Stallion.'

"Ever since I watched that movie I wanted to be a jockey," said Beauregard, who started riding show horses that her mother Rhonda Madsen worked three jobs to pay for beginning when she was 12 winning first-place red ribbons just about every time she competed.

Getting her jockey's license in 2002, Beauregard's start as a jockey was far from auspicious. Riding at B circuit tracks like Kamloops, B.C., Lethbridge, Millarville, Grande Prairie and later that fall at Hastings Park in Vancouver, Beauregard rode 58 thoroughbred races. She never won any of them.

"They were almost all horses nobody else would ride," said Beauregard, whose first professional mount was on May 19, 2002, at Kamloops. Riding Princess Rutheena, Beauregard finished third. But that wasn't as good as it sounds. There were only three horses in the race.

Her second mount, also on May 19, also finished last. So did her third and fourth rides. Even when she didn't have a mount on the card, Beauregard would still go to the jockeys room and put on her silks. "I did that in case some jockey didn't show up. Nobody would give me a chance."

But give up? Never. It all changed when Beauregard moved to Manitoba in 2003 and a trainer, Tom Gardipy Jr. took a liking to her. "He gave me my opportunity. He got me started. I owe so much to him and his family"

Her next year was even better. She won 77 races as an apprentice. From that point on, Beauregard almost always finished in the top five in the jockey standings in Alberta.

"She really thinks a good race," said her agent John Heath. "She studies the Daily Racing Form awfully well. She knows how a race should unfold and she places a horse well. Most of her races have been on five-eighths mile bull rings and on that small of a track - because of traffic - things don't play out how you think they should.

"She's also really good away from the starting gate. She put a lot of horses on the lead that you wouldn't think would be there."

This is hardly the first time Beauregard has been injured in one of the most precarious of professions where it is never a question of getting hurt but when you are going to be injured and how seriously.

On August 19 in 2011 while riding a green, two-year-old who was hard to steer because it kept wanting to duck in, Beauregard fell off the horse's back and got hung up in the stirrups - her head violently hitting the ground. She was out of action for 18 months with a very serious concussion.

"I walked off the track on my own but I had to sit down. I sat for 20 minutes. I was nauseous and too dizzy to walk." She missed the rest of that season and then all of 2012 with more dizziness, blurred vision and sensitivity to light.

Twice, Beauregard has broken her back. The first time came on July 5, 2014 when she was working a good-looking, young, chestnut named Señor Jerry down the stretch at Northlands Park.

Again without warning, Señor Jerry took a crippling bad step and Beauregard was catapulted over the horse's shoulders landing head first on the track. The horse then somersaulted and rolled on top of her.

"Shannon was crying in pain," said Heath, one of the first on the scene. "The first thing you worry about is a broken neck. But she was moving her legs so that was at least a good sign." It was about the only good news. Beauregard broke six vertebrae in her thoracic spine. Altogether there were 20 fractures.

For almost five months, about the only thing Beauregard could do was to lie down on a recliner chair. Lying in a bed was virtually impossible. "At first the decision was whether to put two rods in my back," Beauregard said after that horrible accident in the Edmonton Journal. "But if they did that then I probably wouldn't have been able to ride again and I couldn't bear that thought. I love horse racing too much."

The second time she broke her back was in the summer of 2018. She had just come back to the barn area after working a two-year-old. "The horse ducked out, made a hard right and hit a wall. It was like a fly hitting a windshield." This time she broke seven vertebrae into 29 pieces.

Along the way she has also torn the ACL in her knee, a ligament in her ankle and broken fingers and toes. "I've been hurt a lot. But nothing like this," said Beauregard. "If I could ride again I would. If there is anybody who wants to be back at it and riding again it's me."

This email address is being protected from spambots. You need JavaScript enabled to view it.
Follow me on Twitter at CurtisJStock

Make a donation to Shannon's Go Fund Me page

More in this category: « "The shoes have been pulled" — Trooper John taking a well-earned retirement Rath has big plans for Wave Burner after Canada Cup Futurity win »
back to top