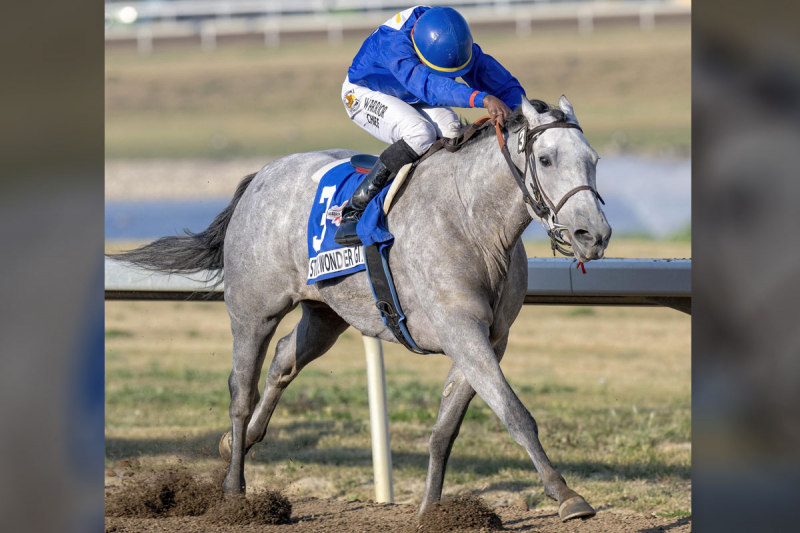 Make no mistake. This is a story about a dream: a fairy tale come true. It is also a magical story that anyone who has ever owned a race horse or has hoped to get one can understand. It is about a horse, Stevie Wonder Girl, that nobody other than Todd Kettleson wanted.

It is about that horse winning $30,000 for Kettleson and his trainer wife, Alivia, in the Alberta Oaks, one of the seven $50,000 Fall Classic stakes on September 10th at Century Mile. It is about hope and faith and castles in the air.

“One thousand dollar horse wins a lot of money,” said Alivia, 36, who has only been training on her own for three years. “That’s a neat story. I hate being in the spotlight but this is a story that needs to be out there. If it can happen to me it can happen to anybody. Horse racing needs more stories like this.”

Kettleson was quietly confident about Stevie Wonder Girl’s chances in the Oaks. “I knew she was going to run well. I knew I had a good shot. I gallop her and I knew she was as good as she could be. I also knew that the mile and a sixteenth wasn’t going to be a factor. She had won her previous start. Her heart was big. She was a hundred per cent sound.”

Alivia ponied Stevie Wonder Girl in the Oaks on post parade and then in the long minutes before leading her to the starting gate. While they walked together on horseback, Alivia and Dane talked.

“I didn’t give him any instructions. We just talked about essentially nothing. I was nervous and I did ask him if he ever got nervous and he said ‘Never. If you’re nervous it’s because you’re green.’ It helped to hear him say that. It’s always nice to know that your rider is confident. But I was still really tense. I could hardly watch the race.”

What Kettleson did see was a tremendous effort from a horse that her husband bought for just $1,000 from breeders Al and Barb Side at the 2020 Alberta Yearling Sale when he was the only one who put his hand up in the air to make a bid. Stevie Wonder Girl was given a perfect ride by Dane Nelson, who saved ground going around the first turn while in heavy traffic, and then taking her off the rail and into the three-path down the backstretch and into the clear.

The latter was a wise move given that the leaders - 26-1 The River Grey, whose only win came in an $8,000 claiming race, and favourite Oneofthemgirls, for all her obvious ability, had never run more than a mile before - figured to tire.

The River Grey was the first to call it quits midway around the far turn letting Oneofthemgirls inherit the lead. But, almost immediately, Stevie Wonder Girl was right on Oneofthemgirls’ heels ready to pounce.

“Dane did a great job. He got her in good position and, more importantly, he got her to relax and settle down,” said Alivia. “Dane and this filly just seem to have a great connection but it’s also why he’s one of the top jockeys this year. When he asked her she responded.”

Did she ever. Drawing up alongside Oneofthemgirls just outside the eighth pole, Stevie Wonder Girl took the lead away and then prevailed in the stretch against a hard closing Lilbitspicy to win by three-quarters of a length. “It was an unbelievable feeling,” said Alivia. “I wouldn’t say I was surprised she won. I was more in shock because it actually happened. I mean she beat a Greg Tracy horse, Oneofthemgirls, that was five-for-five in Alberta stakes races and who was Alberta’s champion two-year-old filly.”

Despite being sired by No Hesitation, winner of the 2010 Canadian Derby, and being out of a mare, Pretty Wonder, by Stevie Wonderboy, who won the 2005 Breeders’ Cup Juvenile, there was certainly no buzz about Stevie Wonder Girl as a yearling.

No Hesitation had never sired a stakes winner before. And Pretty Wonder, who was a big, good looking horse that Alivia had galloped a decade ago, had only won two cheap races in her career for total earnings of just $21,000. “Todd picked Stevie Wonder Girl out. We looked through the sales catalogue to see what we could possibly afford. Then we weeded through the ones that were not going to go for much money. We’re both very modest people. Todd is a farrier and I train,” said Alivia, who worked for one of Alberta’s all-time top trainers, Dale Saunders, for eight years learning the ropes and always having at least one horse for herself.

Before that she free-lanced her talents galloping horses and breaking yearlings. “We usually buy one or two yearlings at the Alberta sale but I wasn’t even sure we should even buy another yearling that year. Covid had just broken out and I just had a baby. We had also just bought our farm outside of Stony Plain. At that time feed was so expensive and the heating costs were through the roof. It was tough. It was scary,” said Alivia, who now trains a barn of about a dozen horses that includes some two-year-olds coming to the track and going back to the farm to mature. I wasn’t overall thrilled with getting more horses at that stage. But Todd had really done his homework. He liked this one and he liked her enough to have her scoped before he bid on her. Somehow it all worked out.”

Somehow indeed. Stevie Wonder Girl had won three previous races before the Oaks. But two of them were for bottom $8,000 claimers and the third - her start two weeks before the Oaks - was in a $15,000 claiming race that she won by open lengths. Alivia said she wasn’t worried about losing Stevie Wonder Girl to a claim. “Not at all. No Hesitation wasn’t a fashionable sire and her mother could only run short distances. And, she had raced really poorly before we dropped her in for $8,000,” she said about Stevie Wonder Girl, who was defeated by a total of 28 lengths in her two starts as a two-year-old and then getting crushed by a total of 19 lengths in her first two starts this year.

But then the light went on and Stevie Wonder Girl figured out what this sport was all about. “At that point all I had to do was keep her happy,” said Kettleson is having a career year as a trainer winning 10 races from just 46 starters. It’s a far departure from last year when she only won one race and that was with Chillin With Chip, who won a $6,000 maiden claimer at odds of 14-1 and who had only defeated five horses in her previous three races. After that win, Chillin With Chip has still not come close to winning again including this past Saturday.

“Last year was brutal. I had some very bad stock. But I survived.” Alivia said Stevie Wonder Girl’s victory was a ‘life changer. “The money comes at a great time heading into winter which is always a stressful time for horse people. We want to fix up our farm. We’ve got four broodmares so we’ve got a lot of stallion fees to pay next year. And we want to reinvest back into the industry. Everything we make we try to put in back in. Some years - like last year - there isn’t a whole lot to put back in.”

If all goes well, Stevie Wonder Girl is being pointed to the October 8 $50,000 CTHS Sales Stake for three and four-year-old fillies going seven furlongs. “There’s also a straight allowance race for three-year-old fillies in two weeks. That might be a good prep for the Sales Stake. If, that is, we run in it. We’ll nominate and see how things shake out.”

Last Saturday’s unseasonably warm and memorable afternoon didn’t start well. Alivia was also supposed to run Wedge Pond, who she trains for Crystal Meadows Farm and Lorna Bygrave, on the Fall Classic card in the Red Diamond Express where he probably would have been the favourite. But just around noon the day of the race Wedge Pond, who had three wins and two seconds in seven starts this year, started acting like he had colic, a painful problem in a horse’s abdomen. “Fortunately it turned out to be just gas; unfortunately we had to scratch him.”

That wasn’t all. In the Oaks Alivia also started 40-1 long shot Lulabelle. But just a few strides out of the starting gate a hard object - probably a rock - came flying back and hit jockey Richard Lunan. “It went straight through three sets of his goggles,” said Alivia. “Richard had to put his head down to avoid any more dirt and essentially took himself out of the race. He told me after the race all he could see was white.

“For a long time I stopped watching Stevie Wonder Girl. I was wondering what the heck happened to my other horse. It wasn’t a great start to the day that’s for sure. Wedge Pond gets scratched. Lulabelle gets taken out of the race. And then along comes Stevie Wonder Girl. Talk about highs and lows. In this sport you have to be prepared for anything because you just never know. Sometimes - out of the blue - something like this can happen.”

This email address is being protected from spambots. You need JavaScript enabled to view it.
Follow me on Twitter at CurtisJStock

More in this category: « Greek Geek finally back on form in Alberta Breeders Handicap Diodoro discusses having two favourites in upcoming Canadian Derby »
back to top